The Renewable Energy of the Ocean

The Earth’s massive oceans have power that man cannot control. Thankfully, can be harnessed to make renewable energy in more ways than one.

Osmosis is the process of equalization between one dilute solution and another less dilute solution through a semi-permeable membrane to create balance. Imagine you have one container of apple juice and one container of water with five drops of apple juice. If only a screen is placed between them, the apple juice will eventually mix with the water to make two solutions that are equal parts water and apple juice. There is potential energy in osmosis in that the apple juice is driven to mix with the water and become less dilute. There is similar potential in the salinity of sea water.

Salt water and freshwater are separated with a polymer membrane, and the salt water draws in the freshwater. This creates pressure, and it spins a turbine to create energy. Scientists created an entire osmotic plant in 2009 in Norway, but it did not produce much power. Osmotic power continues to be an experiment in marine power that scientist struggle to magnify its potential.

Anyone familiar with large bodies of water knows that temperature fluctuates greatly based on depth. Renewable energy scientists have found a way to combine warm coastal waters with cold, deep-ocean waters to create steam. The steam turns a turbine similar to the way osmotic pressure turns a turbine. One example of this exists on the shores of Hawaii, and one unit is able to power over 100 homes. This may not be the most economically-efficient way to produce ocean energy, but it’s clean. 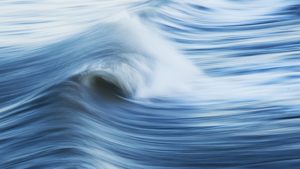 The tides bring multiple types of renewable energy because they are constantly moving.

A barrage is similar to dam, and the ocean has a back-and-forth current with the ebbing and flowing tides that can make a turbine move. Of course, this creates the potential for power.

A tidal fence is like an underwater barrage. It uses the incoming and outgoing tides to turn turbines in the water, which also create energy like turbines and barrages.

The Key is Renewable, and it is in the Ocean

All over the world, scientists are trying to find better forms of renewable technology that don’t interfere with the health of the planet. Wind turbine plants are going up across the country. Solar panels are topping the roofs of houses around the world. Micro-grids are becoming more common in small communities to provide alternative sources of energy.

The point is, renewable and efficient energy is a common goal for both money savings but also Earth-saving technologies. Many of the methods used to harness marine energy is expensive, but it is less harmful to the environment. Once it is running, it costs much less to run than fossil fuel counterparts.

The case of osmotic power is a perfect example of the sentiment of oceanic renewable energy: everyone is trying to do the best they can to less climate change and humans’ impact on the Earth. Some experiments may not yield extremely valuable results, but they all reduce power consumption by humans on Earth.

There are many other options for oceanic power available and in different stages of production. For example, blankets on the ocean floor will lift with tidal changes and cause movements on floats that move turbines and produce electricity. There are many potential sources of energy from the tides and the temperature differences in the ocean.

One of the greatest benefits to renewable energy sources in the ocean are that they are cleaner options than fossil fuel options in more ways than one. Gas from fuel tankers spills into the ocean each year (see the recent news from the Houston Channel). We spend hundreds of dollars in energy-deficient forms of energy production each year. In contrast, energy efficient options may use batteries or other clean forms of energy in order to get their items to run off of electricity.

Consumers Must Put Renewable Energy to Use

Once you are ready to consider renewable technology as a significant source of energy for your home, you will find that many forms don’t fit residential applications. It is good to know that they exist, so you can get as close as you can to eliminating your carbon footprint. Maybe this means you get solar panels, or you hook up to a local windmill.

Any of the options for renewable energy are applicable to the home, but renewable energy from the ocean is unique because it is constant due to the ocean’s movement. It is not used as a primary source of energy yet, but it shows promise.