Most people have power strips in their house, and these are used to provide extra outlets where needed. Additionally, many if not most power strips are also surge protectors, which means they protect devices from power spikes throughout the day. 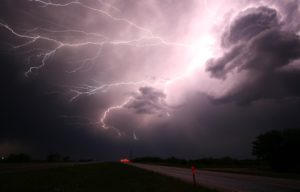 Why Do My Devices Need Protection?

Anything with a microprocessor can be damaged by power spikes, and in modern times, most items that require an outlet have a microprocessor. The most common items to protect are items that cost more money to replace, such as computers, televisions, and large appliances.

Power surges vary in degrees of intensity, and it may be impossible to protect any electronic device from a surge caused by lightning. These powerful surges may cause circuits to fry, plastic components to melt, and fires to start. However, small power surges rarely do any visible damage.

Because the damage from small surges is not visible, it compounds over time. The heating and cooling of electrical wiring and components causes “electronic rust,” and the items degrade over time. Eventually, they stop working properly or stop working at all.

External power surges occur outside of the home. As mentioned previously, the biggest surges are caused by lightning. When lightning strikes electric utility equipment, it can introduce thousands of volts of electricity into your home. This is why it is not only a risk for electronic devices, but it is also a fire risk.

Other external power surges can occur if an animal gets in a transformer and damages equipment or when power is turned back on after an outage. Some surges can be created with large fluctuations in electricity usage by the population of an area, such as during lunches at a factory or at night, but these are much smaller. External power surges are less likely than internal surges.

Internal surges are created any time a motor in a device turns on or off. Items with heat coils, such as hairdryers, draw more power, and refrigerators and air conditioners are also common culprits. Internal power surges are common, and they may happen 10 to 100 times a day in a home. Again, these may go unrealized, which is why they degrade devices over time. If homeowners want to extend the life of their electronics, they must protect their devices from power surges. 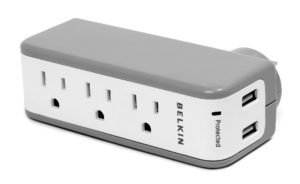 Power strips are not surge protectors!!!! That is, unless they are. Don’t automatically assume that you are protected by a power strip unless it states that it is also a surge protector.

There are two types of surge protectors:

Service entrance surge protectors are installed at the electrical panel or meter. They protect all devices whether plugged into a SPD or not, and it reduces the power of all external surges, which means that in the case of a lightning strike, the surge that reaches the SPD will be reduced.

It is possible for one lightning bolt to contain hundreds of thousands of volts of electricity. The voltage varies based on the size of the bolt and environmental conditions, so the damage produced by these volts varies from minimal to catastrophic.

Protection from lightning strikes is possible by both types of surge protection devices, but it is not guaranteed. Because of the varying conditions and power of strikes, they may still have the power to melt electronic devices and fry circuits. Therefore, the only way to truly protect electronic devices during an electrical storm is to unplug devices.

Extend the Life of Electronics

Power surges are an everyday occurrence in every home. Most of them go undetected, but they cause damage to electronic devices and microprocessors, which greatly reduces the life of expensive devices such as televisions and computers. Lightning strikes are a rare occurrence, so protection from everyday surges is essential to protecting all electronic devices in the home. This can be done easily by purchasing quality surge protectors.