Power Plants and Poles: How the Grid Gets Electricity to Your Home - Bray Electrical Services | Atlanta's Trusted Electricians

How your home gets electricity is an accomplishment of humankind that is taken for granted. Here are some of the primary factors involved, but this just scratches the surfaces of the details involved.

People are familiar with many types of power plants. They are often a subject of debate because there are so many modern, cleaner options. Dams, windmills, nuclear and coal power plants are all commonly known types of power sources for power plants. These sources create a way to spin a turbine. Coal uses steam to turn it, dams use water pressure, and so on. The electricity produced through this travels to a substation where transistors convert it to very high voltage in order for it to travel the long distances it needs to reach people. It then travels on high voltage lines carried by lattice towers. 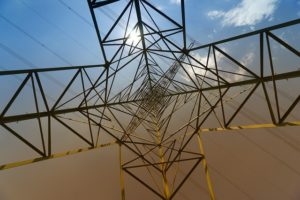 Lattice towers are those metallic structures that sometimes resemble some sort of robots lining up over hillsides to take over the world. These are the lifelines of the grid, and power cannot be shared with other grid users without these towers. These 120-foot gigantic power structures span all across the country.

Because of the way they are built, lattice powers are fairly transparent from afar, so they don’t spoil natural landscapes with man-made ugliness. They are also very versatile. Typically they are built with cranes. Pulley systems can be erected to get the job done when cranes are not an option. What you end up with is a tower that is very structurally sound and is configured in a way that can hold multiple circuits and conductors.

These large towers typically carry high voltage lines, which are uninsulated power lines that carry electricity for long distances. They carry high voltage as opposed to low to be more efficient and to travel farther. Since there are not enough storage facilities to keep a good energy supply, electricity is consumed on an as-needed basis, so these lines are constantly working.

High voltage lines can be installed underground instead of on lattice towers, but this is very expensive and rarely done except in cities or other areas where necessity dictates it be done that way. The advantage of underground lines is aesthetics and lower maintenance, but they are also more difficult to get to, so this is not a complete advantage. Most of the time, you’ll see wires up ahead rather than have them underfoot.

The power from high voltage lines is too much for distribution to homes, and it must be pared down at power substations. The substation splits up the power and sends it in different directions. Transformers at the power station are responsible for paring down the power to under 10,000 volts. That power then goes to a distribution bus that sends it in different directions. This power then is sent out to homes via three wires for the three phases of the electricity. 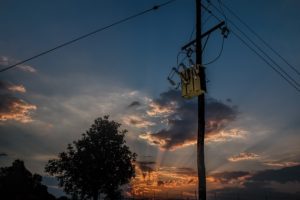 The three power lines that travel into towns via grounded power poles have intermittent regulator banks. These banks ensure that the voltage is adequate for homes. Each home only needs one phase of the electricity. Only a single wire will be tapped from the three and enter the home. At the house, there is a transformer drum on the power pole that reduces the power coming into the home to 240 volts. This enters your home at your meter. The meter is how your utility company knows how much to charge you for energy use every month.

Finally, electricity enters your electrical panel, which is really a safety device to control electricity in the home. These circuits will trip, or turn off, when overloaded in order to reduce the chance of an electrical fire in the home.

It is difficult to imagine when you turn on the television how complicated it was to get that electricity to you. The grid runs without the user thinking about it, which is what makes it so amazing. When the grid fails, it is obvious what we all take for granted. Failures should be happening with less frequency as micro-grids and alternative energy create redundancies that limit our reliance on the grid.

It is difficult to imagine a world where we don’t need a grid on the scale that we have today. Some of this is becoming a reality. Home batteries are giving consumers a way to store enough power to run homes for weeks. This makes solar power a viable option even without being connected to the grid. Solar panels are also becoming less of an eyesore. They can even be disguised in shingles that allow your roof to look normal while still providing electricity for the home.

The Grid is old, and in many cases, it is outliving its life expectancy. To replace it would cost a terrible amount of money, but it will probably happen on an as needed basis. At some point, it may be retired, but not any time in the near future. The increasing need of electricity in light of the want to reduce oil dependency is too great.