In the kitchen, water cannot fight all fires. That’s because most fires in the kitchen are electrical or grease fires, and water makes the effects of the fire worse. 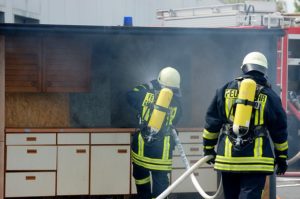 In the case of grease fires, splashing water on the fire simply displaces the flaming oil. It can spread the fire in an explosive manner. Instead of water, turn off burnes if reachable, or unplug appliances if able. Then, the fire can be suffocated with baking soda, salt, a lid, or even a wet but not dripping towel.

If that sounds too much like firefighting, you’re right. It can be dangerous. These methods are only appropriate for very small grease fires. Once the fire has taken hold, getting out of the house should be your primary concern. Still, there are fire extinguishers rated for grease fires, or flammable liquids, which make fighting a small grease fire a less dangerous option.

Similar to grease fires, electrical fires should not be fought with water. Water is an excellent conductor of electricity, so it can carry the electricity to other flammable items or put a person at risk for electrocution. Again, power should be removed from the area of the fire whenever possible, either by unplugging the item or turning off a switch. 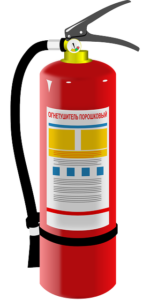 You can prevent electrical fires by handling electrical equipment appropriately. Hold plugs securely when plugging them in or removing them from outlets in order to preserve the integrity of the cord. Don’t use too many extenders (extension cords and power strips), so you don’t overload circuits. Don’t cover extension cords with rugs. Keep electrical cords away from water and extreme heat.

You can also prevent electrical fires by inspection. Inspect all cords to make sure they are not frayed or worn. Use cords appropriately. Don’t compromise safety by altering three-prong plugs to fit into two-prong outlets. Lastly, pay attention and seek the service of a qualified electrician if experiencing flickering lights or other things indicative of electrical wiring or circuitry problems.

Lastly, make sure you have the right type of fire extinguisher for the job. If you don’t know what type you have, make sure you find out. It is likely that you have one that will handle an electrical fire, but you must be sure.

When in Doubt, Get Out

If an alternative method is not suitable, get out as quickly as you can. Ultimately, lives are worth much more than any inanimate object, and at a certain point, survival becomes the priority.

Understanding fire extinguishers can be complicated, but there are standard extinguishers that can be picked up for a reasonable price that are clearly labelled for kitchen use. As long as you make sure they are charged, they should do the trick should any type of fire occur.