The most you’ve probably ever thought about your ceiling fan is that it collects a lot of dust. You turn it on absent-mindedly to keep air circulating, but you probably don’t truly appreciate what it does. All of that changes when you are buying a new ceiling fan. 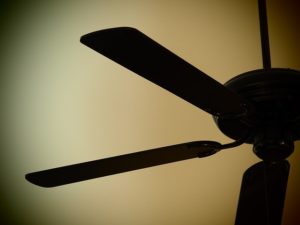 One of the biggest things people consider when picking out a fan is appearance. While this is very important, as dated fans can really affect the decorating scheme, there are other things to know about ceiling fans in order to make a good purchase.

5 Things to Know about Ceiling Fans

On most ceiling fans, there is a small switch near the motor that controls which direction the blades spin. Typically, counterclockwise motion means the angle of the blades pushes air down for the purpose of cooling a room. This does not create cool air like an air conditioner, but it does create air movement that can cool a room adequately during mild warm weather. This may also be nice if a room has become overheated from cooking or lighting a wood stove.

Switching the fan to clockwise motion typically cause air to be pushed up, which circulates air in a room. A person may not feel the air movement, and it is a nice way to keep even temperatures in rooms. In winter months, heat will rise to the ceiling, and a ceiling fan is a nice way to ensure a room feels warm all the way down to the floor.

When selecting a fan, make sure that the switch is easily accessible, so you can easily switch directions as needed.

Lighted ceiling fans are a great way to light up the whole room, and they can add a touch of beauty to the design of the overall fan. The biggest thing to think about when considering a lighted fan is ceiling height and whether or not you want light in that location.

Most lighted ceiling fans hang significantly lower than unlighted. However, there are low-profile LED options available that add minimal size.

How you are going to turn your fan on and off is sort of a fun thing to consider because there are so many options. The simplest option is a pull string, which can easily start or stop the fan and requires very little extra wiring to a switch.

Another option is to have the fan wired to a wall switch. This is a lot of work if it is just a ceiling fan, but if it is also the light to the room, it might be worth it.

The most fun option is to go for the gusto with a remote control or smart fan. Remote controls may offer the additional option of controlling which direction the fan spins or how fast it spins. Smart controls can make your ceiling fan voice controlled. These are luxurious options that don’t cost a lot of money, and they are smart options when fans are mounted on vaulted ceilings that make pull strings a poor option. Alexa, turn on the fan!

In order to determine the optimal size for your ceiling fan, you should calculate the square footage of the room. This is done by multiplying the length of the room times the width of the room. The amount of air a fan can move is calculated by cubic feet per minute. The fan packaging should have a guide to show what size of room it can accommodate. I very large rooms, multiple fans may be required for good air movement.

You can get pretty technical when it comes to fan blades, and the number of blades, material, and aerodynamics of the blades can be considered. More blades make fans quieter, but they also move less air. Material, generally speaking, is a cost and visual factor. MDF blades are the least expensive, but wood or iron blades can be an attractive alternative. Aerodynamics is typically not a consideration, as that is left up to scientists and computers, but you can get into it if you want.

You don’t have to have a ceiling fan, but it sure is nice. Rooms feel way more comfortable when air is circulating, and it’s nice to have the cooling option when needed. When you go to purchase a new ceiling fan, whether it is replacing an old one or a new installment, you should come equipped with some basic knowledge about fans. You will likely choose it based on aesthetics, but there are some things that are worth considering in addition to looks.