10 Ways to Camouflage your Television

Here are 10 ways to camouflage your television, so it will blend into your decor.

The new high-tech or smart home does not simply hang a television on the wall, and more often, one will see it disguised in a cabinet with a lift station. These lift stations can be purchased separately and installed in nearly any type of cabinet. Sometimes they are installed within faux mantles to make them appear like they are coming out of the fireplace, or they can be installed at a cabinet at the end of the bed. Smaller version have even been installed in kitchen cabinets. Installing a lift cabinet in any room allows the room to retain its formality while maintaining its ability to entertain. Don’t forget about your outdoor kitchen! Lift cabinets take away the conflict of deciding where to put a television when it doesn’t fit the mood of the room.

The Samsung Smart TV comes in a Frame Series, which has disguise components built in to its programming. The TV will disguise itself as art and will display a frame and the artwork on the screen when you push the power button. There are a number of matte and frame choices, pre-installed artwork, and you can pick your own photos or art to display. 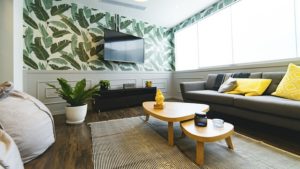 Just like the media hutches of the past, your TV can be hidden within the confines of a cabinet. The benefit to today’s media hutches in that they take up much less room because televisions are so much flatter. TV hutches have been making a comeback after their great demise after flat screens. It is no longer taboo to include one in your decorating scheme so long as you make sure it’s modern and made for today’s flat screens.

There are multiple companies now producing mirrors that camouflage a TV within their frame. This can be a large or small television. It can be the main attraction when the TV is on, or it can be a small part of the mirror mean for viewing while using the mirror. There are many different types of these mirrors with varying quality. They definitely allow a person to camouflage the television in any room of the house.

Motorized retracting canvases are a very literal way to cover your television by placing artwork over it when not in use. A more fashion-forward way to do this is to roll the artwork over the television on a galvanized track. Some people are even placing retro roll-maps over their television, which definitely adds a vintage touch.

Bifold doors or shutters are an excellent and decorative way to add a country or woodsy touch to your television. They may look like they are hiding a window behind their doors, but in reality, it’s your television. This is a great option when you already have the TV and aren’t looking to spend a lot of money on making it blend into the room.

End of bed lift cabinets are a common way to see televisions hidden at the foot of the bed. There are also lift stations that will take the television all the way underneath the bed. This is especially helpful when room size makes an end-of-bed cabinet seem like too much of a space hog. Keep your bedroom light and airy by stuffing your TV under the bed.

Lastly, just about every modern flat screen comes with the option of a screen saver of some type. Whether this is a cozy fire or beautiful art landscapes, your television does not have to be a dark eyesore when it is not in use. Turn it on, and leave it on a screensaver, and you’ll have art instead of dark. Televisions don’t use much electricity anymore, so you won’t see a big change to your electricity bill. Instead, your television will enhance the beauty of your home. You’ll be glad you have it even when you aren’t using it.